Thank you all for the sweetest comments, texts, and thoughts on my last blog post. For those of you who’ve met Bessie, it is clear how much she’s touched your lives as well. She is a really special pup and we feel so lucky 🙂 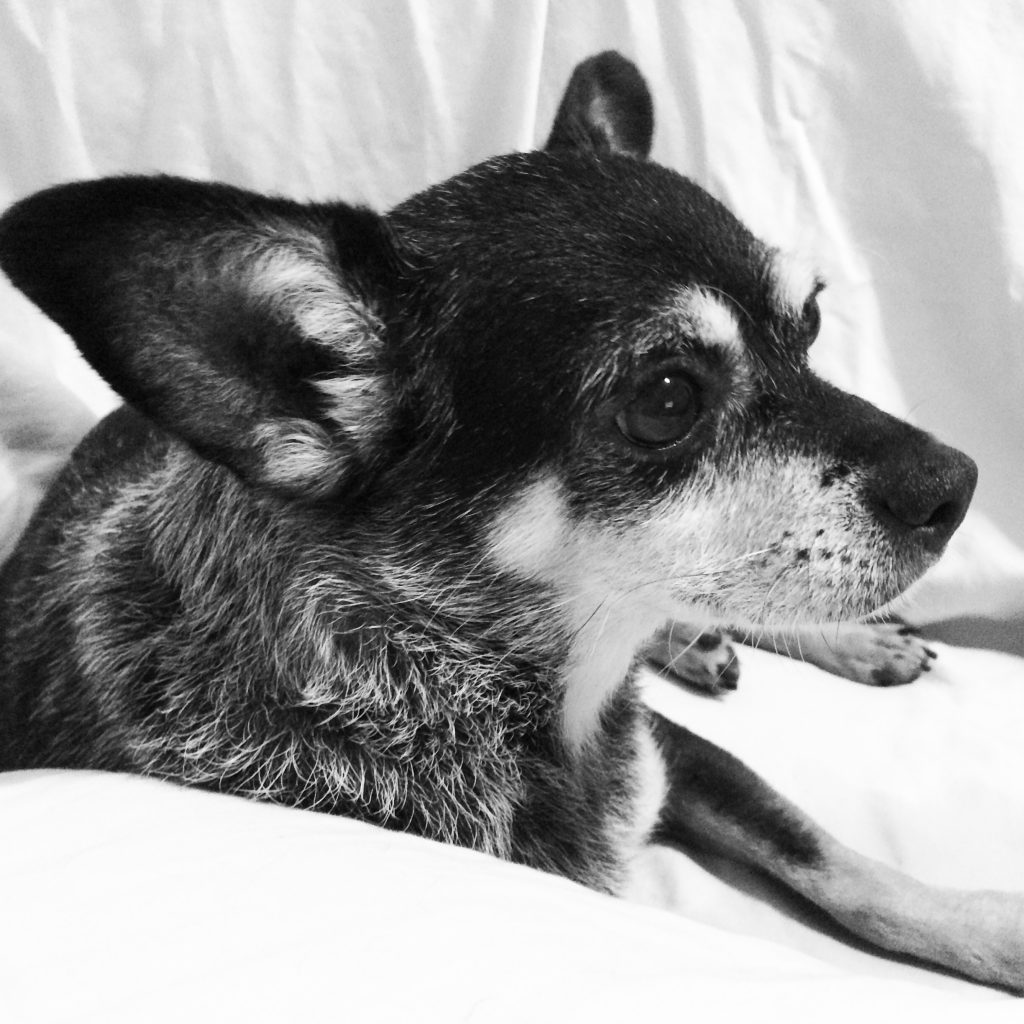 Besides adopting Bessie, this past month has actually been a fairly eventful one for me! I am leaving my position as a consultant and transitioning into a very different role (but one that I think suits me very well). I am going to be doing marketing for a restaurant group in LA! While it was a difficult decision to leave my current job, I am very excited for this new journey in the food industry. I know I will learn so much and I will be working in and industry that I am so passionate about.

To celebrate this new phase in my career, Travis took me out to dinner to Fig and Olive in West Hollywood. Neither of us had been before, but it’s been on my list of restaurants to try after numerous friends raved about it. Our meal was incredible. Unfortunately, the restaurant was very dark, so the pictures I snapped did the meal no justice, therefore I decided not to share them with you guys. At the beginning of the meal they brought over three different types of olive oil for us to sample with warm doughy bread. This was easily my favorite part! I was tempted to tell them to cancel the rest of the orders because I just wanted bread and olive oil for dinner, but I didn’t think they would necessarily approve of that… 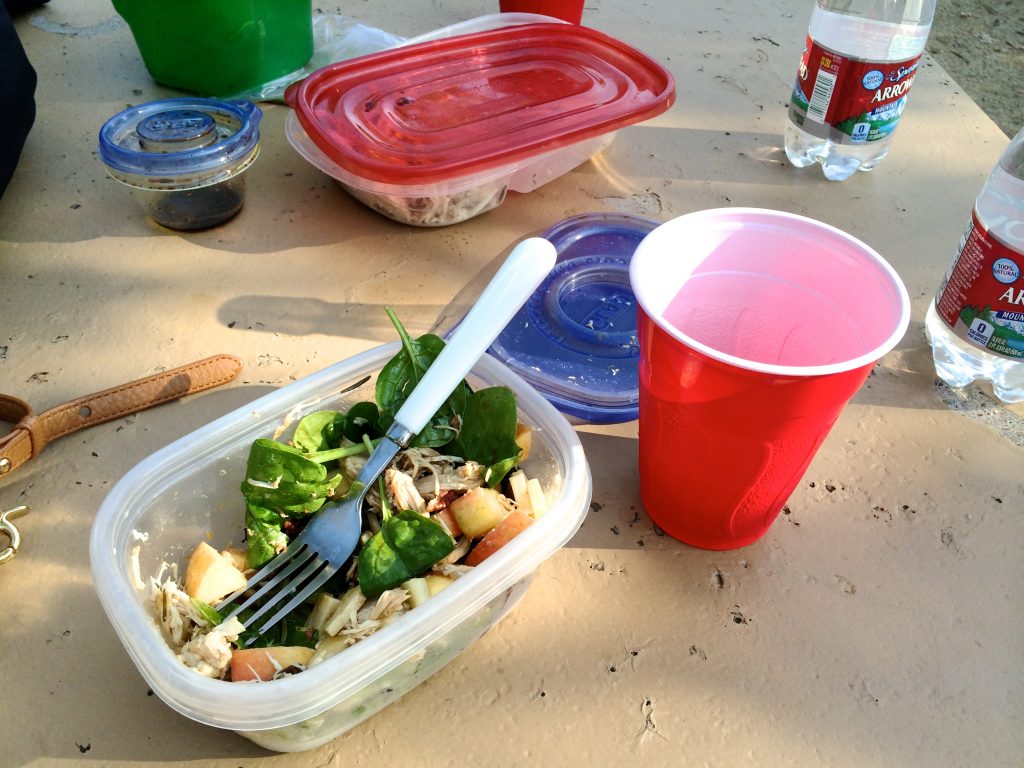 On Thursday, Travis and I went to the Eminem and Rihanna Monster Tour at the Rose Bowl Stadium. We bought the tickets the day they went on sale many months ago. I always find it so difficult purchasing tickets so far in advance because I think to myself, “well how do I know where I am going to be six months from now?” In the end, I am so happy Travis persuaded me to go through with it because the concert was a blast!

Since the Rose Bowl is pretty far from where we live and since the stadium sent us numerous emails in advance warning everyone of how crowded it was going to be, we decided to beat the traffic and get there early. We packed dinner and some snacks in a cooler so we could tailgate. We were planning on just eating in the car once we parked, but we lucked out and ended up parking right next to some picnic tables, so we were able to sit down and spread out for a few hours before the show. I packed us salads with pink lady apples, golden raisins, celery, toasted pecans, chicken and a balsamic vinaigrette. I know what you’re thinking… not your typical tailgate food, but we figured we would end up eating some sort of unhealthy snacks once we were in the stadium, so we decided to keep it pretty light for dinner. 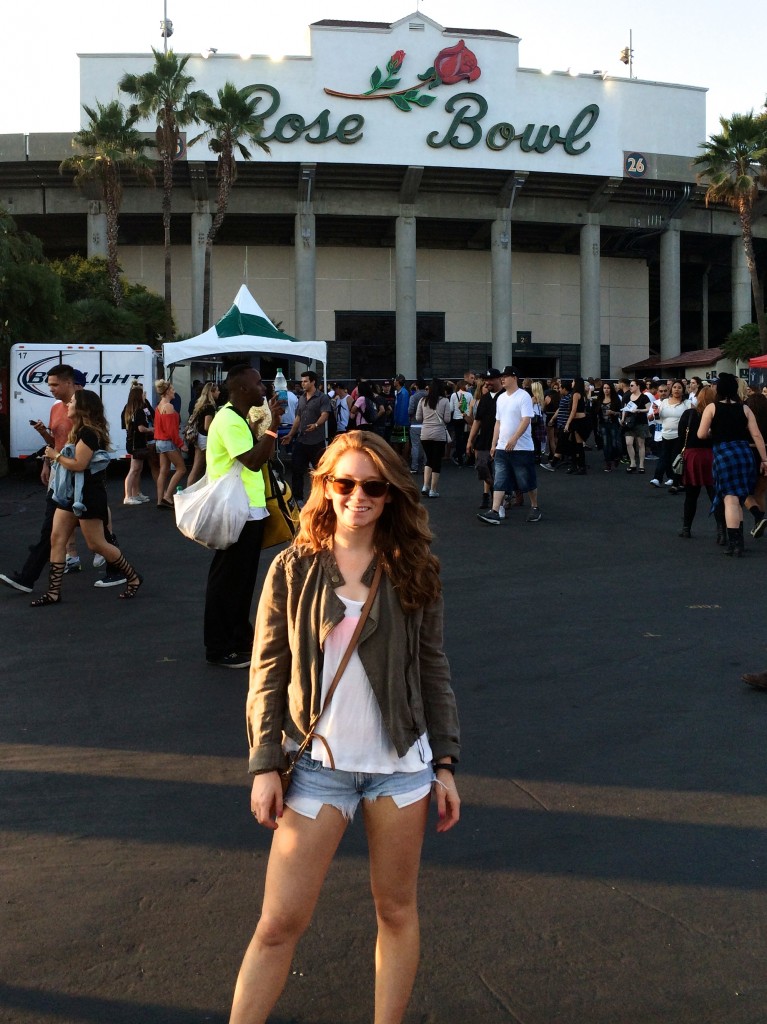 The concert was an absolute blast! The music and the entire atmosphere was amazing. It was such a fun thing to do in the middle of the week to break out of our usual routine. I do love Rihanna’s music, but I personally think Eminem stole the show. I’d never seen him live before, but he KILLS IT on stage. (Oh yeah, and we did enjoy our fair share of stadium food and drinks throughout the show).

This past weekend was pretty low key. It included lots of walks with our favorite pup: 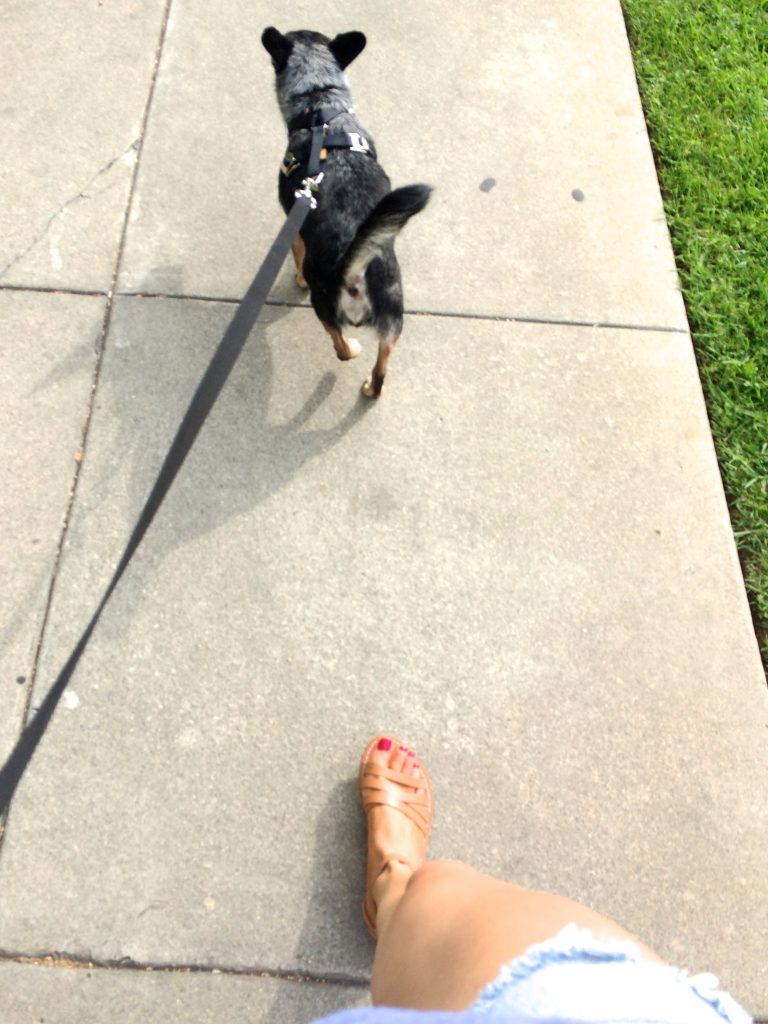 …which turned out to be a disaster. This weekend was an utter failure in my kitchen. I set out to test and photograph four different recipes for you guys this weekend and ALL of them turned out terribly. Even my trusty taste-tester, Travis, told me that none of them were blog-worthy (don’t worry, he let me down nicely). By Sunday afternoon I was feeling pretty frustrated because I’d thrown three recipes into the trash can and I hate wasting food! The final recipe was a cookie recipe that Travis and I agreed was edible but tasted “too healthy,” which is never a goal of mine when I am baking dessert. Oh well! I guess they can’t all be winners. Bessie on the other hand, has been having a BLAST trying new food recently. Travis has been doing lots of research on all-natural and grain-free dog foods for her. I know that some people think grain-free dog food and all of the recent dog food trends seem silly, and I get it to some extent. But we want Bessie to stay healthy and live forever, so that means that means lots of exercise and healthy, all-natural dog food. Travis and I don’t put processed foods into our bodies, so why would we feed it to her?

Over the past month, we’ve taken a bunch of trips to various pet stores in the area to buy Bessie food and treats. We always bring her along with us because pet stores are like a playground for her. She loves sniffing Every.Single.Bag.Of.Food in the stores. I think in her ideal (but not very rational) world, we would put ALL the food into our shopping cart to bring home for her. Right now we’re feeding her Blue Buffalo Wilderness Grain-Free dry food and (along with anything else you feed her) she seems to love it, so I think we’re going to stick with it for now.

Dog owners out there – have you found the perfect food for your senior pup? Bessie is by no means picky, we just want to make sure we are putting the best stuff possible in her little body.

Recipes to come later this week!