I had an amazing time in NYC this past weekend. 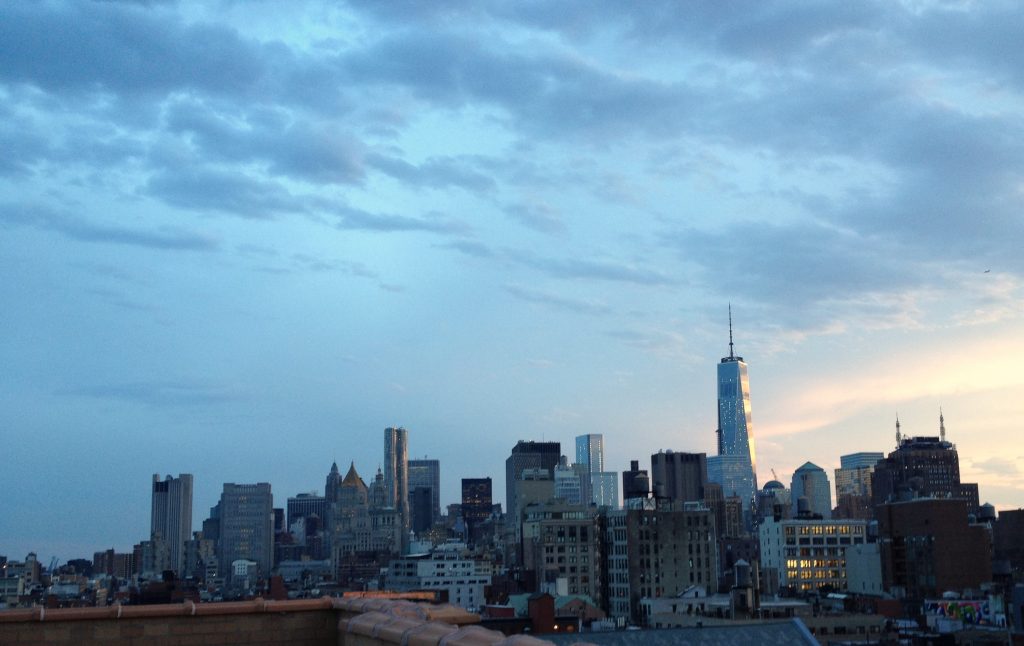 Travis and I crammed so much into four short days.

Part of the reason we were going to NYC was so Travis and his best friend, Ben, could celebrate their birthdays together with a bunch of our friends from college. 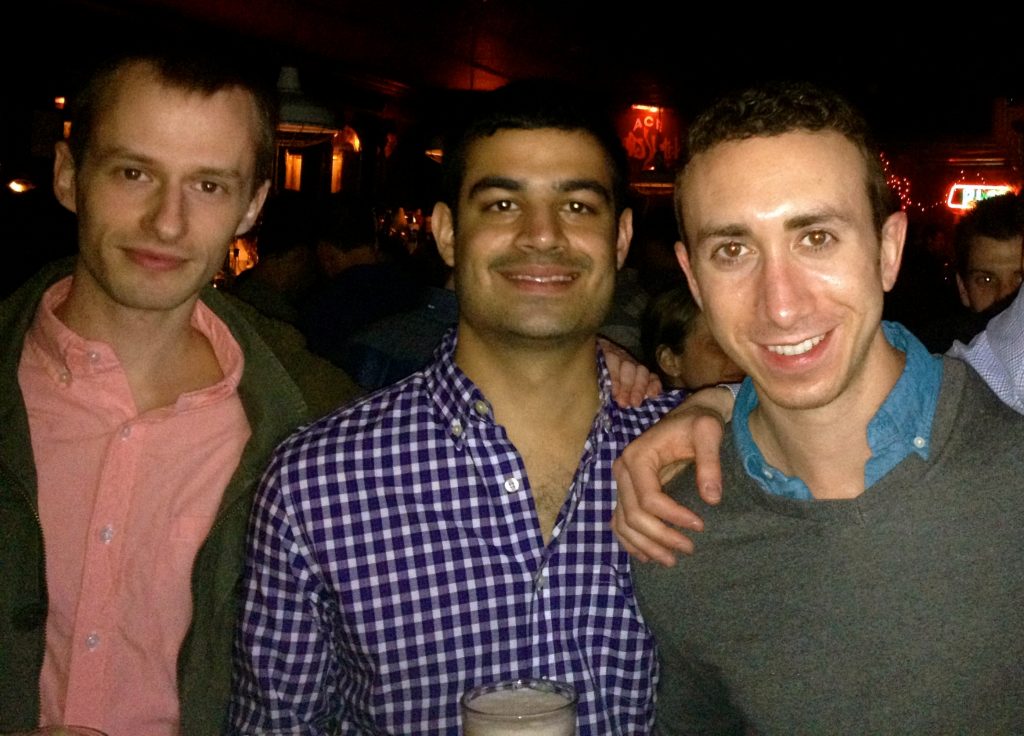 The entire weekend was packed with birthday festivities, catching up with so many old friends, and eating some seriously delicious food.

I was so excited to spend time with one of my oldest friends, Erica. We met at camp when we were in middle school and remained very close ever since. 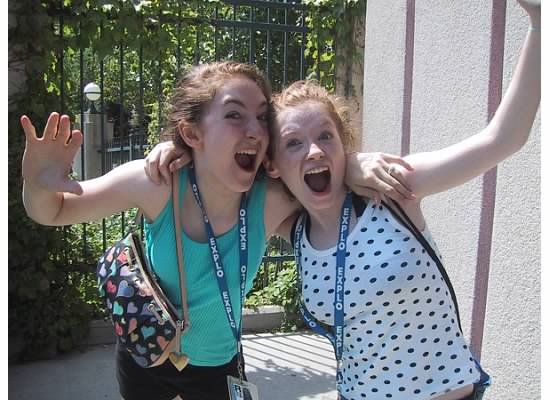 (Back then, we were incapable of taking a serious photo together…ever.)

Up until this weekend, it had been three years since we last saw each other! It certainly didn’t feel like it, though. We picked right back up where we left off. Erica and I spent the afternoon wandering around Soho and laughing non-stop. I seriously love this girl.

This weekend, I also got to see two of my best friends from my sorority at Penn, Caroline and Kelsey. 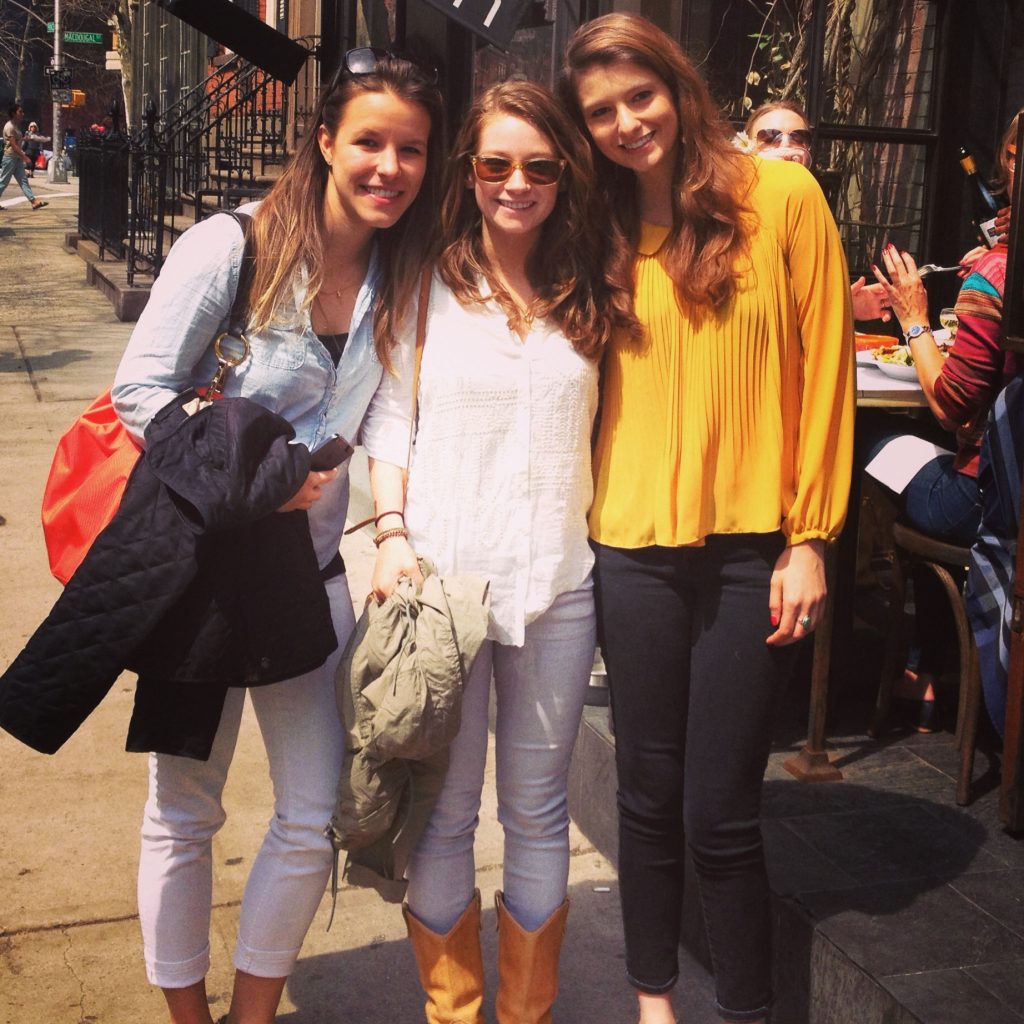 Spending time in person is 9383924007443 times better than talking on the phone and texting. I wish we all lived blocks away from each other again!

As I mentioned, throughout the weekend, Travis and I ate numerous yummy meals. The highlight, though, was our experience at the Experimental Cocktail Bar in the Lower East side. On Sunday night, I took Travis out to dinner for his birthday at Balaboosta (it was absolutely incredible, by the way!).  His friend suggested that we check out ECC  after dinner since it was a short walk from where we were staying. 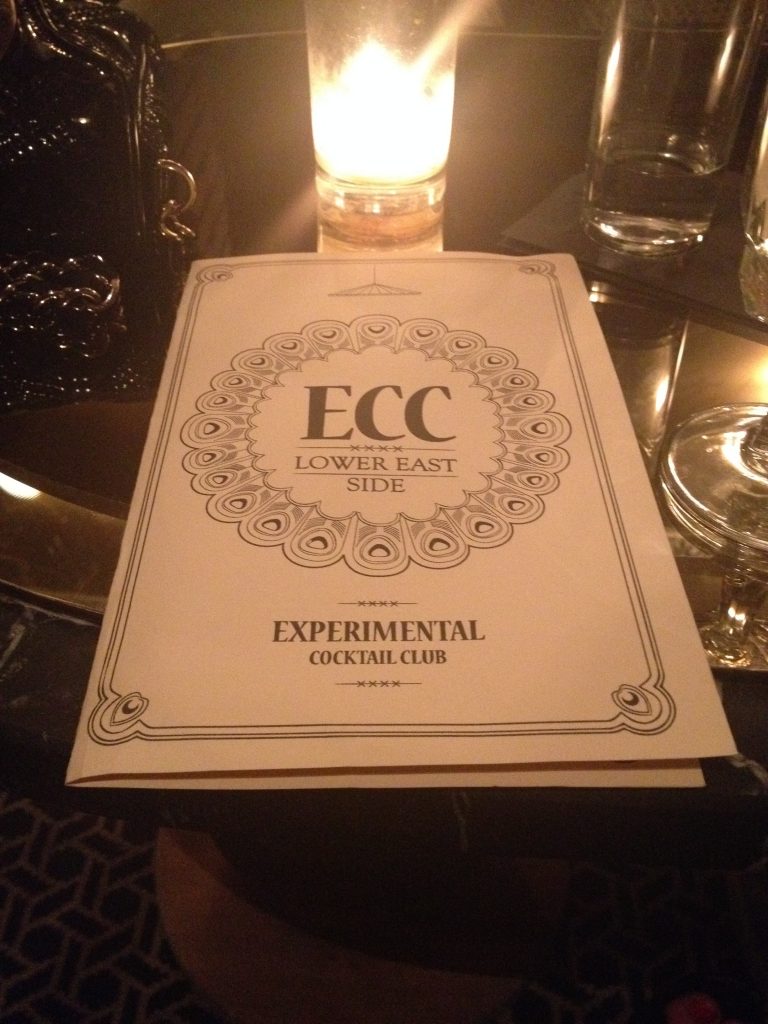 I have to be honest. Neither Travis or I really drinks cocktails (usually wine for me and beer for him), so we were a bit hesitant when we saw that this place ONLY served cocktails. Luckily for us, since it was a Sunday night, the place was basically empty, so we got some SERIOUSLY good attention from Joji, the master mixologist. 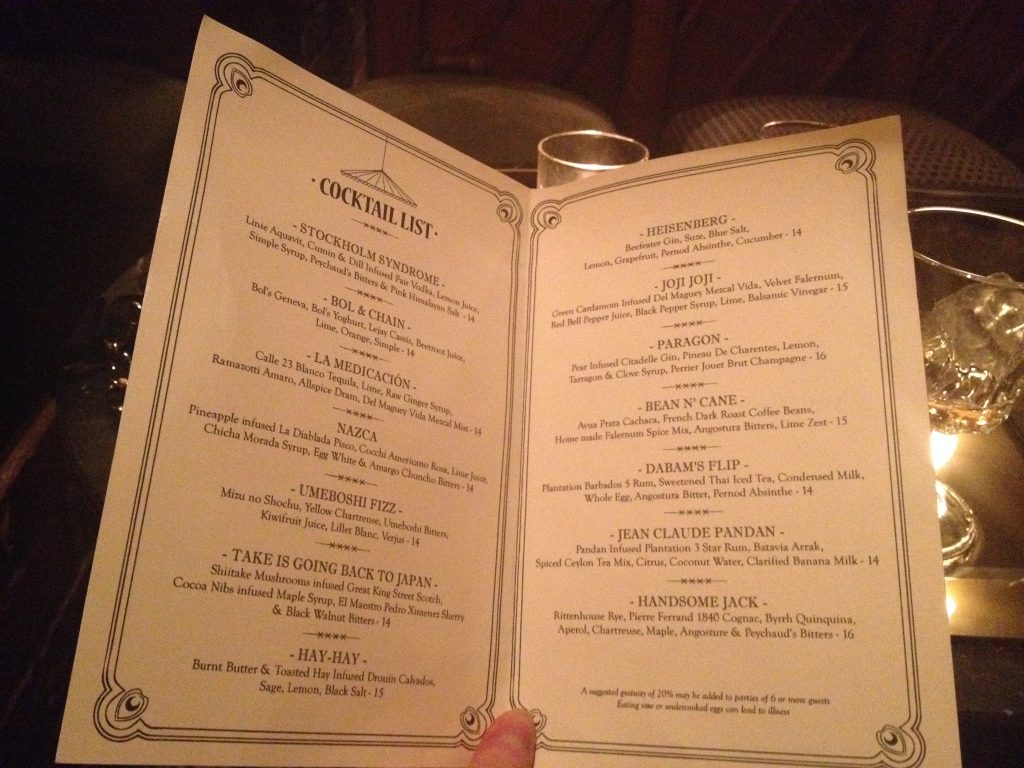 Joji came over to our table and asked us what flavors we liked and didn’t like. He then suggested a drink for each of us based on our preferences. I started with the Paragon and Travis ordered the Stockholm Syndrome. A few minutes later, Joji delivered our cocktails in beautiful glasses. I felt like I was dining in a mansion at a black-tie event. The klutz in me was so nervous I was going to break it. 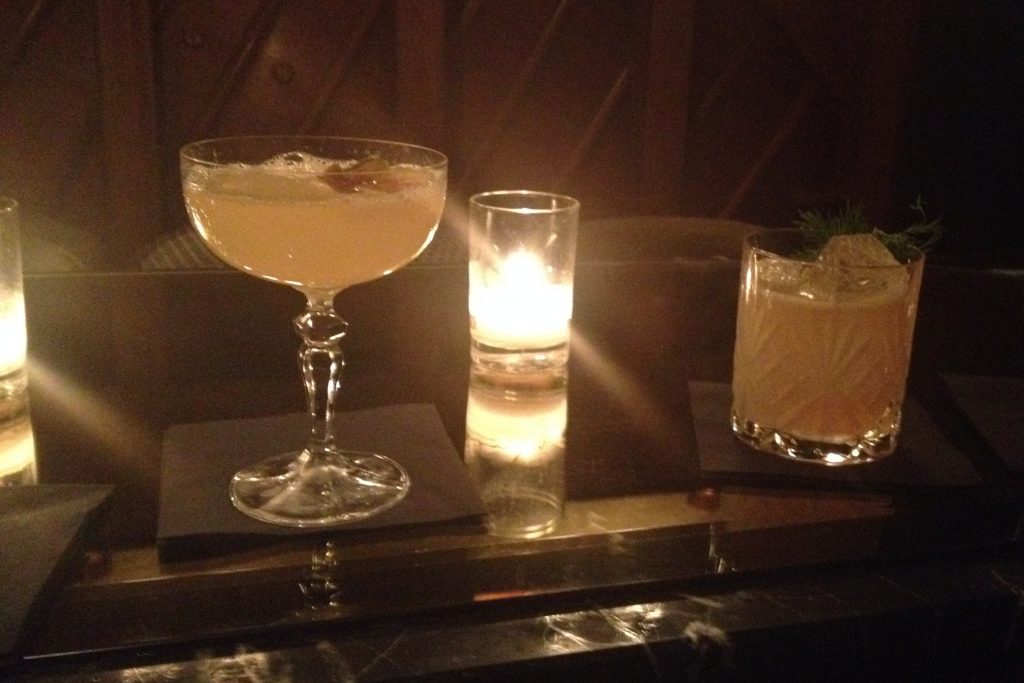 We each took one sip of our drinks, look at each other, and said simultaneously, “This is the best drink I’ve ever had!” The drinks we so creative and well-balanced. The foodies in us had us guessing every flavor that hit our lips. We complimented Joji and told him how well he understood our preferences.

A few minutes later, Joji was back at our table holding a little glass bottle. Inside, he said, was a special cocktail that they don’t make at the bar because it takes four days to make. I was shocked, so I asked him how it could possibly take that long. He explained there were numerous steps involved, such as roasting strawberries, adding milk, straining the milk through a cheese cloth, etc., etc.

He poured a bit of the cocktail into two glasses for us to try. 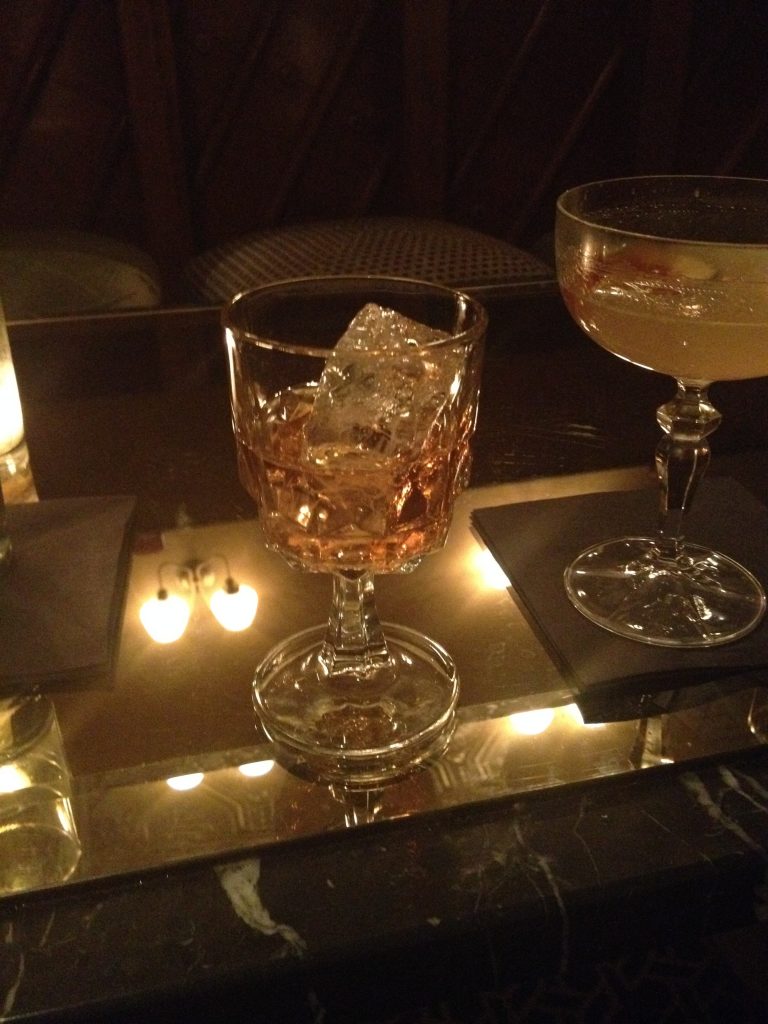 Just based on the amount of labor that went into this drink, we couldn’t believe he was being so generous! After one sip of the drink, Travis and I turned to each other again and proclaimed that THIS was in fact the most delicious drink we’ve ever had. It was silky-smooth, sweet, but well-balanced, and had a clear presence of cinnamon and nutmeg. It tasted almost MAGICAL, as if no human on earth could have made this drink.

Throughout the rest of the night, Joji took incredible care of us. At the end, I got up to use the restroom and when I came back there were two of those little glass bottles sitting on our table. I asked Travis what they were, and he said, “Joji gave us souvenirs to take with us before our flight tomorrow.” Can you believe that!? He gave us TWO MORE of his incredible 4-day cocktails. On the house! Talk about amazing service. I think Joji appreciated how interested we were in the process and science behind his drinks. 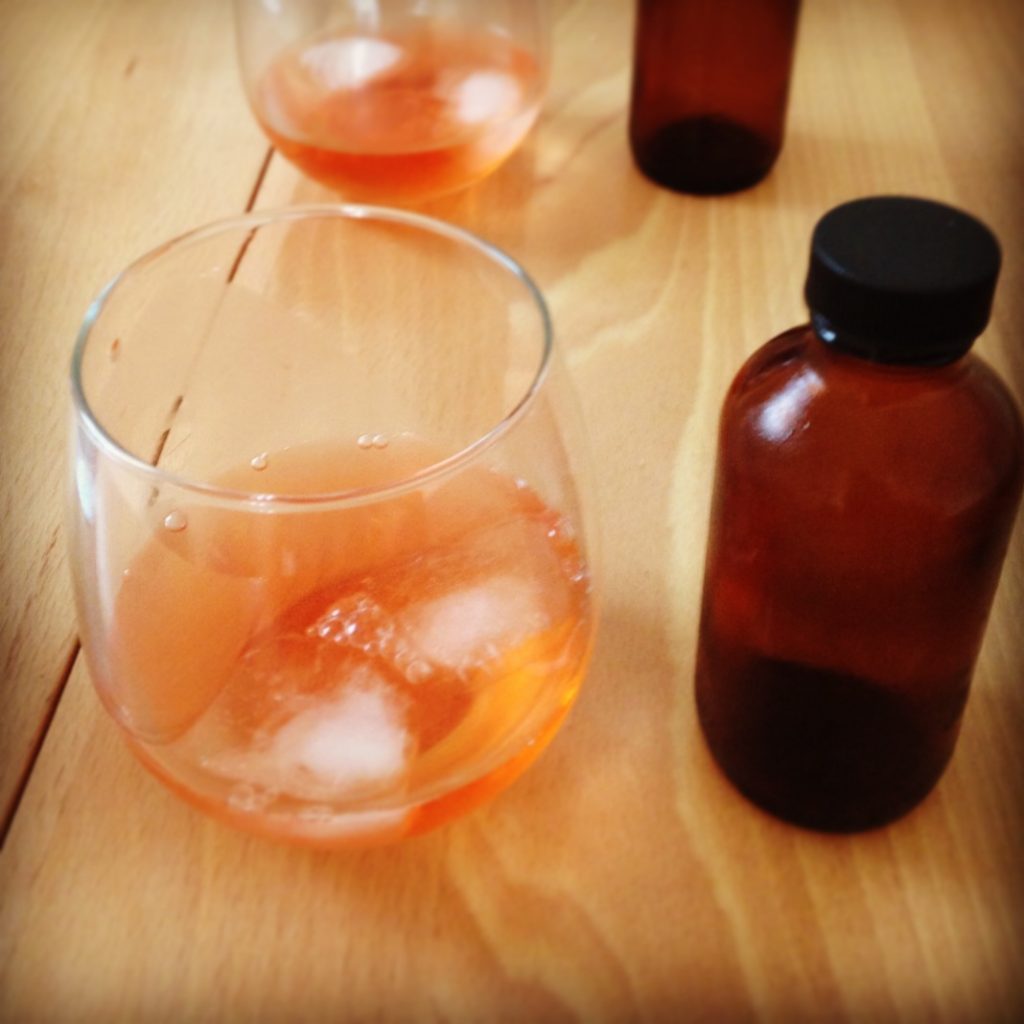 Before we left for the airport on Monday afternoon, we poured ourselves the cocktails from Joji. We were in a bit of a hurry, so we couldn’t savor each sip like we did the night before, but they were still just as incredible.

I know we wouldn’t have received such great attention at Experimental Cocktail Club on a busier night, but those three hours at ECC were some of the coolest I’ve ever had at a restaurant or bar.  I highly recommend ECC to anyone visiting NYC, but I suggest you go on an off-night, like we did, so you can get the most out of your experience.

It was very hard to leave New York and all of our friends, but I know we will be back sometime soon.

Have you ever been to Experimental Cocktail Club? What was the best service you’ve received at a bar or restaurant?