When I last left you guys, I mentioned how I thought my flight to DC was going to be canceled because of the big snow storm, Jonas, that hit the East coast last week.

Well, I ended up being able to get on an earlier flight, so I got into Washington DC on Friday morning right before all of the snow madness hit the city. The timing worked out perfectly because my friend Emily, who is a nurse, was called off of her shift so she and her fiance, Nate, were both able to pick me up from the airport.

When I arrived, we made a pit stop at the grocery store to pick up last minute food items in case we got snowed in. Well…it turns out that the entire city beat us to it. 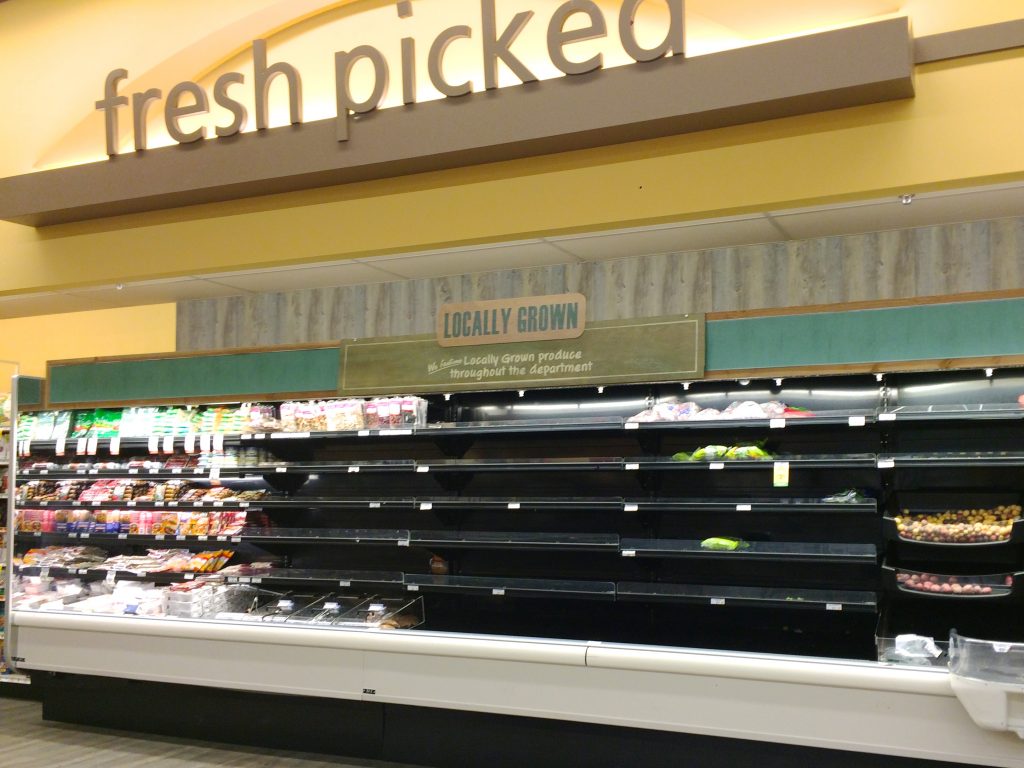 ALL OF THE FOOD was gone. I am not kidding. There was no fresh produce (I saw maybe one red onion), no milk, eggs, anything!

Here’s Emily on her tippy-toes trying to see if there is maybe just one carton of eggs left at the top there. Nope! 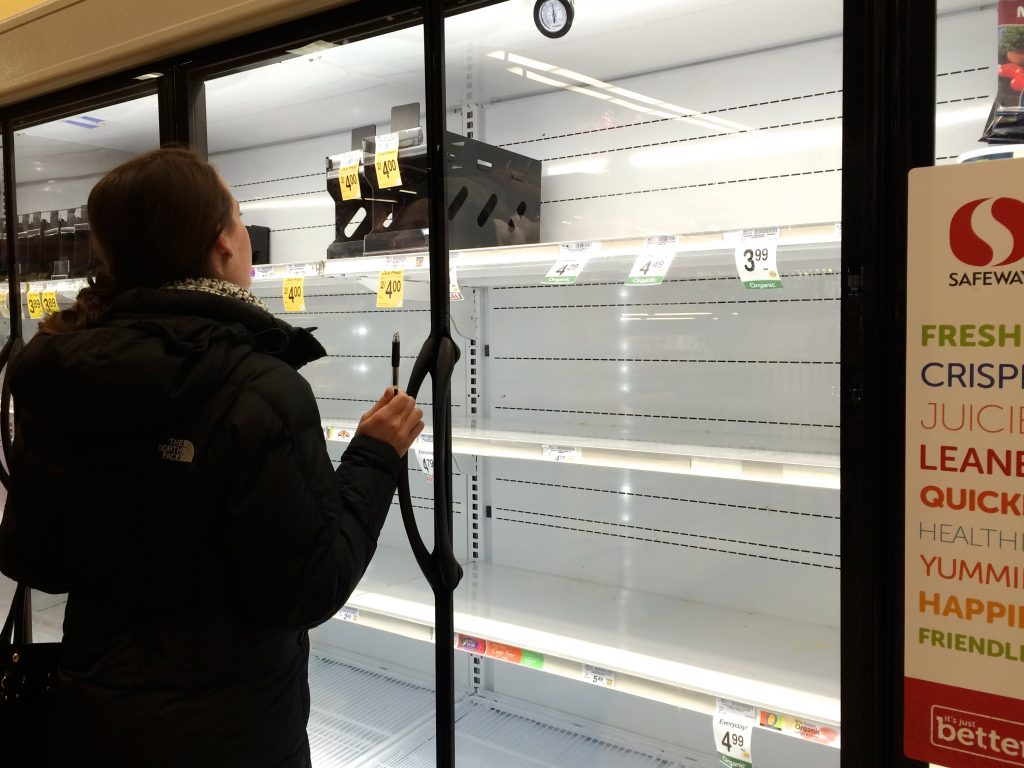 Now, I just want to point out that coming from LA, I was drastically unprepared for the amount of snow that fell. All of my snow and warm winter gear are at my parents’ house in Boston, so I flew to DC with a warm-ish coat and Hunter rain boots to protect my feet from the wet snow. 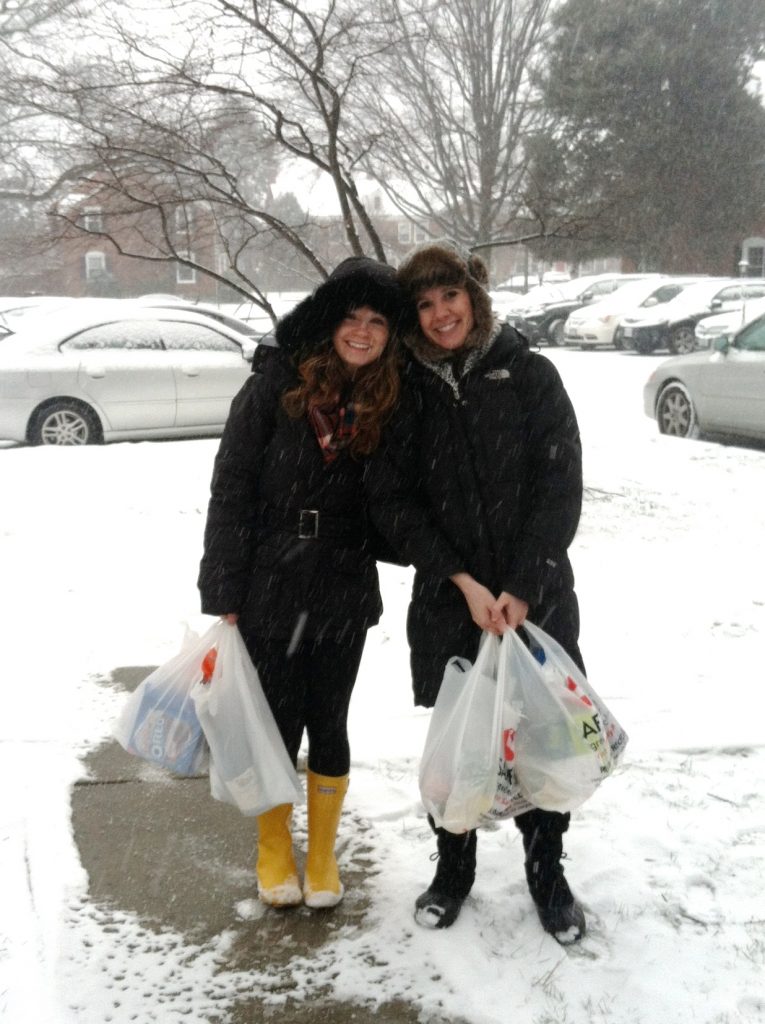 All in all, it didn’t really matter because we spent a lot of time inside over the weekend. We were disappointed because all of the wedding dress appointments that Emily had booked months in advanced were canceled. Now I guess I won’t see her dress until the big day!

We were able to make do food-wise with various items Emily and Nate had in their house. On Saturday afternoon I threw together a pasta dish with roasted vegetables, shrimp and a white wine sauce.

I’d say for not having many things left, it turned out pretty darn well! And obviously because we were snowed in we had wine with lunch (and pretty much every other meal! Haha). 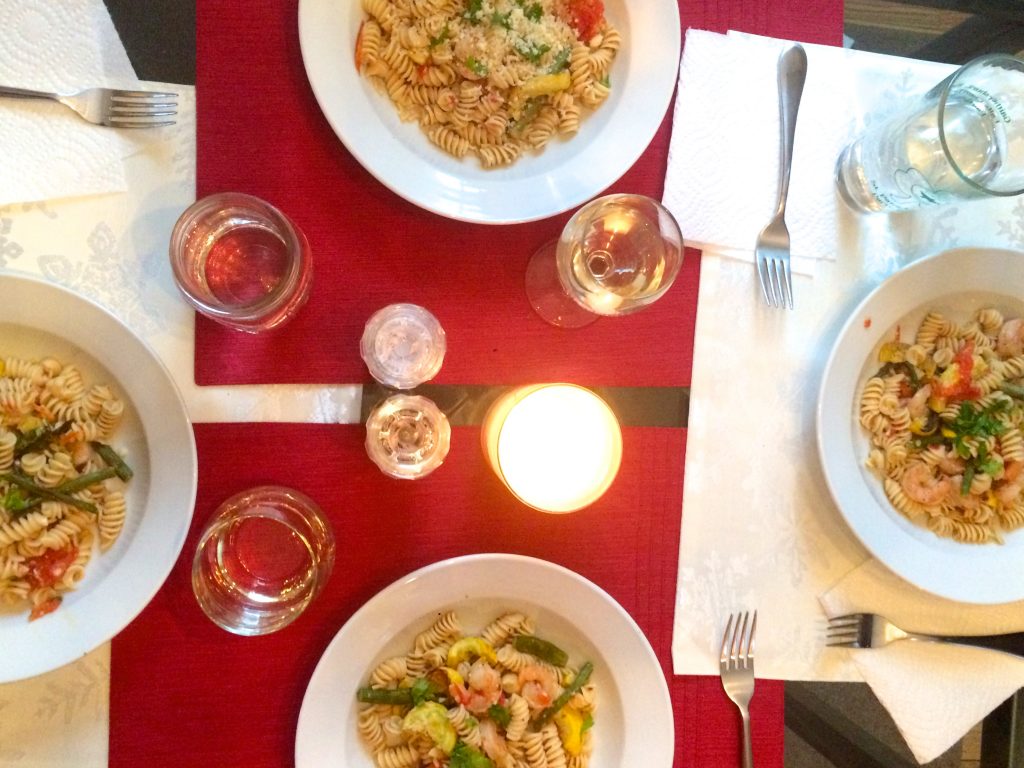 Since I was completely unprepared for the snow clothing-wise, I was basically useless to Emily and Nate when it came to shoveling. 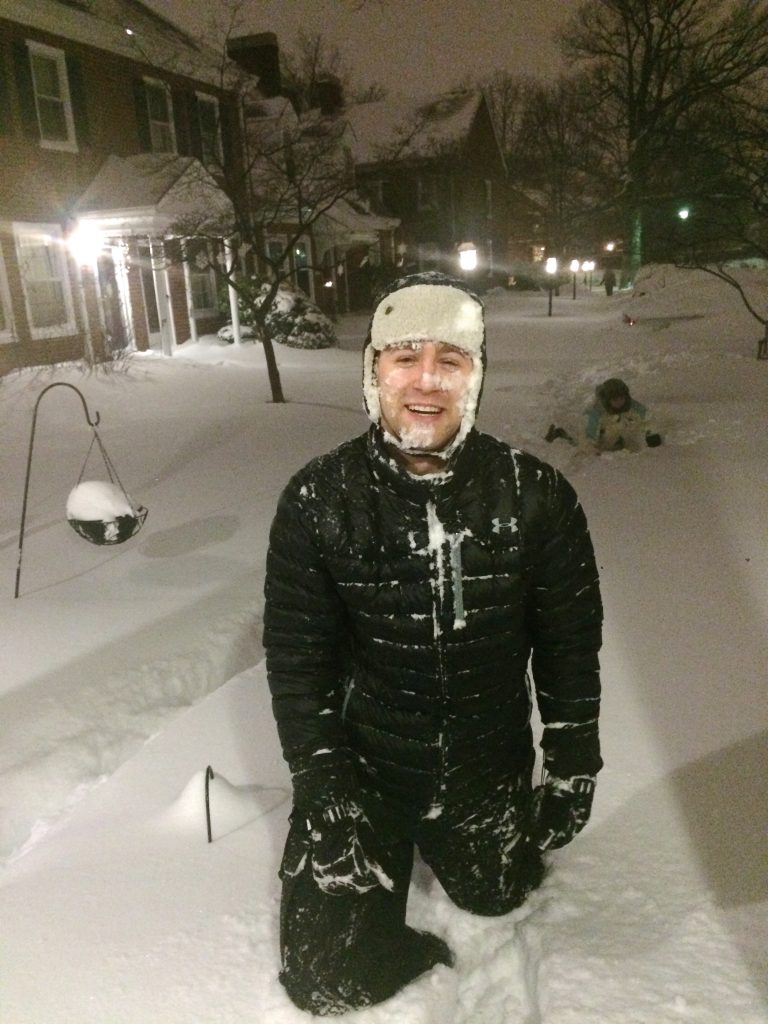 Nate was a champion and spent 7+ hours over the weekend shoveling out their cars as well as the walkways and cars of their elderly neighbors. I kept saying the poor guy deserves a massage and a tropical vacation after all he did! 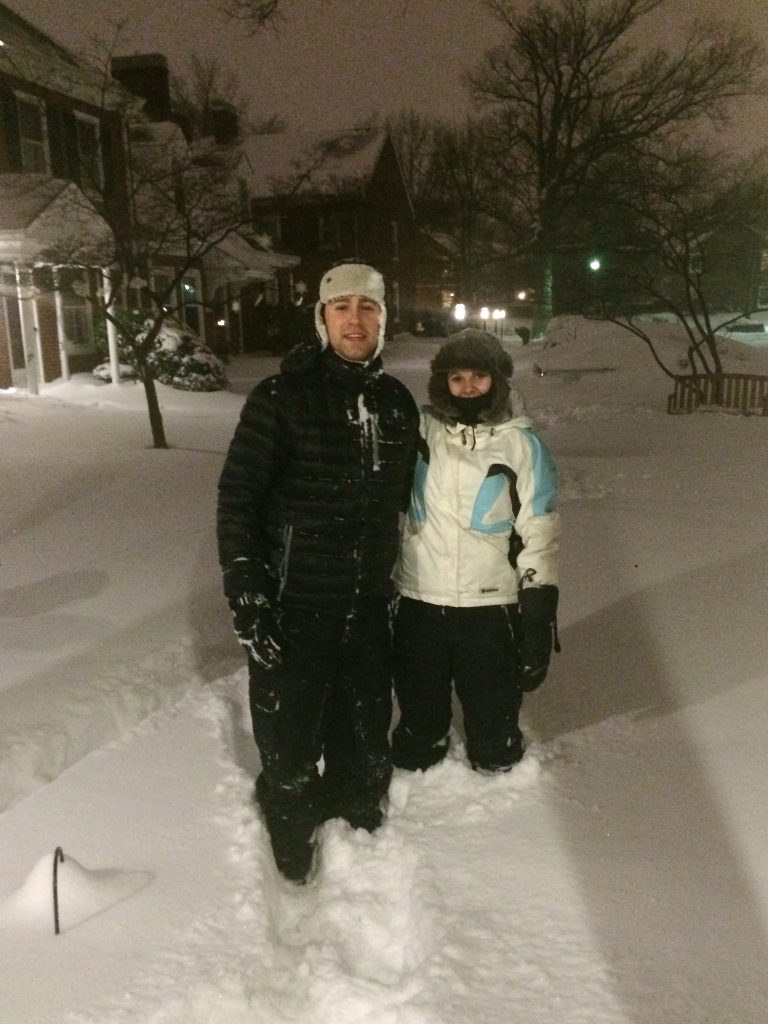 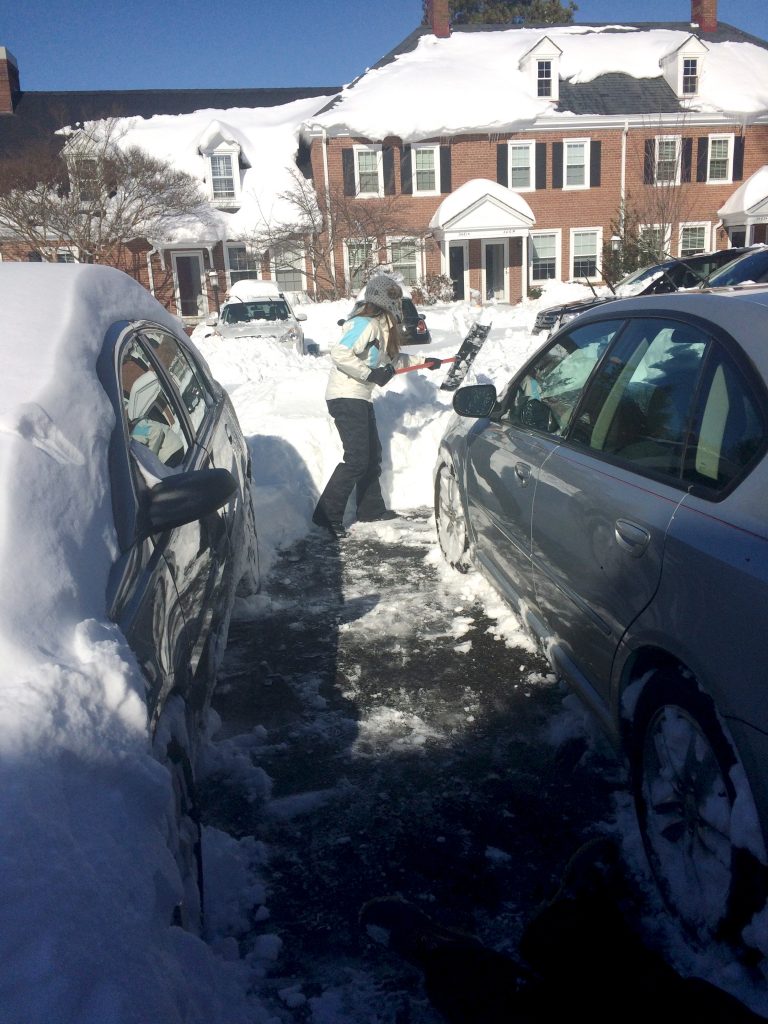 My flight back to LA ended up being canceled on Sunday evening because all of the airports in the city were closed. (Although, I was secretly excited because it meant more time with my BFF who I hardly ever get to see!)

On Sunday, I spent a couple of hours on the phone with various airlines trying to get a flight back to LA. It was an absolute nightmare and some airlines said it would take a few more days before I could get back!  Eventually, I was able to book a flight for Monday morning, which was a big relief because I had to get back to work. Unfortunately, my flight wasn’t direct and I spent a lot of time waiting around in airports.

I will say that the Charlotte airport has some DELICIOUS food options. One of the places in my terminal was like a big fresh food market and I was able to get this INSANELY yummy breakfast frittata with roasted vegetables. It was only $8 and it was so big, I ate it for two meals. Big win for the Charlotte airport! 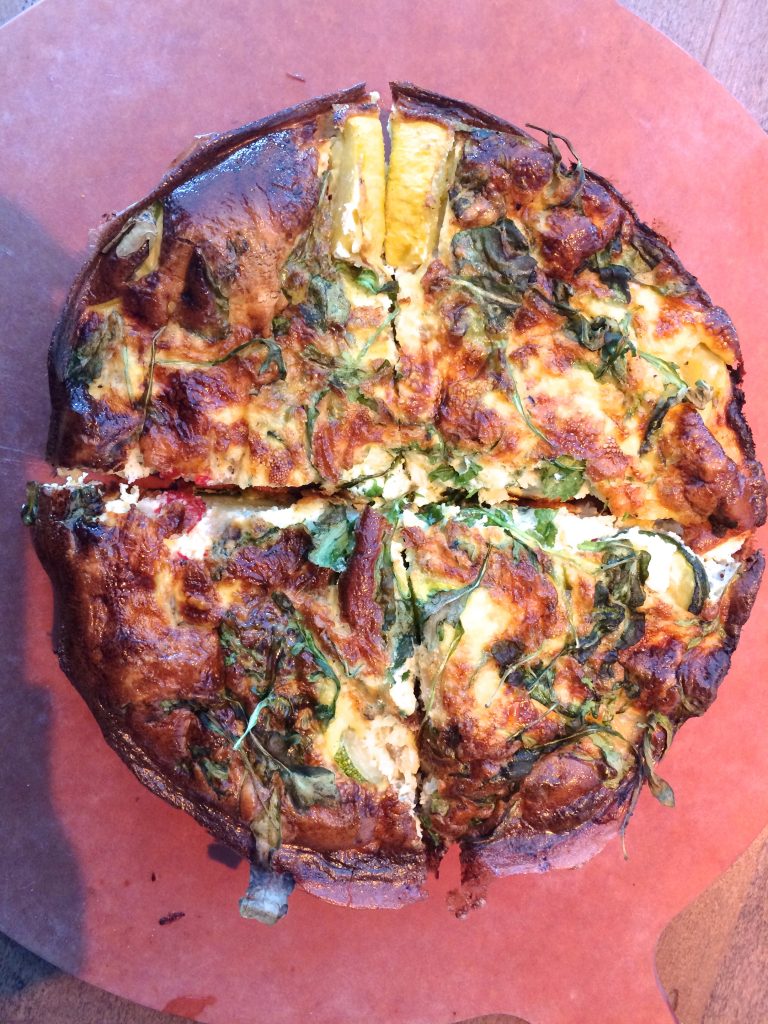 When I landed back in LA late on Monday, Travis and Bessie picked me up from the airport. There is something so nice about being picked up by a loved one rather than taking a cab or public transportation, don’t you think?

The following day (Tuesday) was my 5th anniversary with Travis. I put together this little photo collage to post to Instagram, but then he beat me to it and posted his own, so I felt weird posting almost the exact same thing, ha! 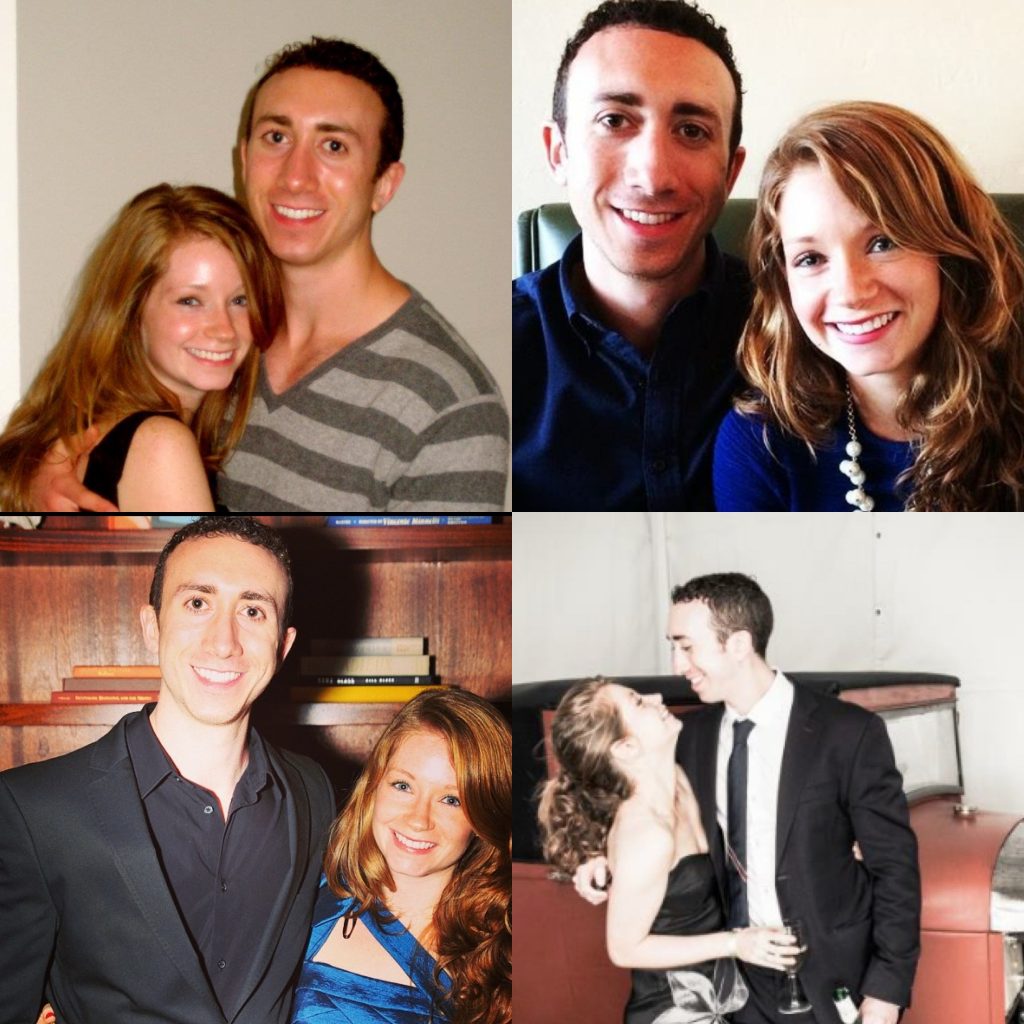 We barely saw each other on Tuesday morning because I had to rush out of the house to get to work. But when I arrived home that evening, he surprised me with a bottle of champagne, two doughnuts from our favorite new doughnut shop up the street, a beautiful bouquet of flowers and a very thoughtful card. 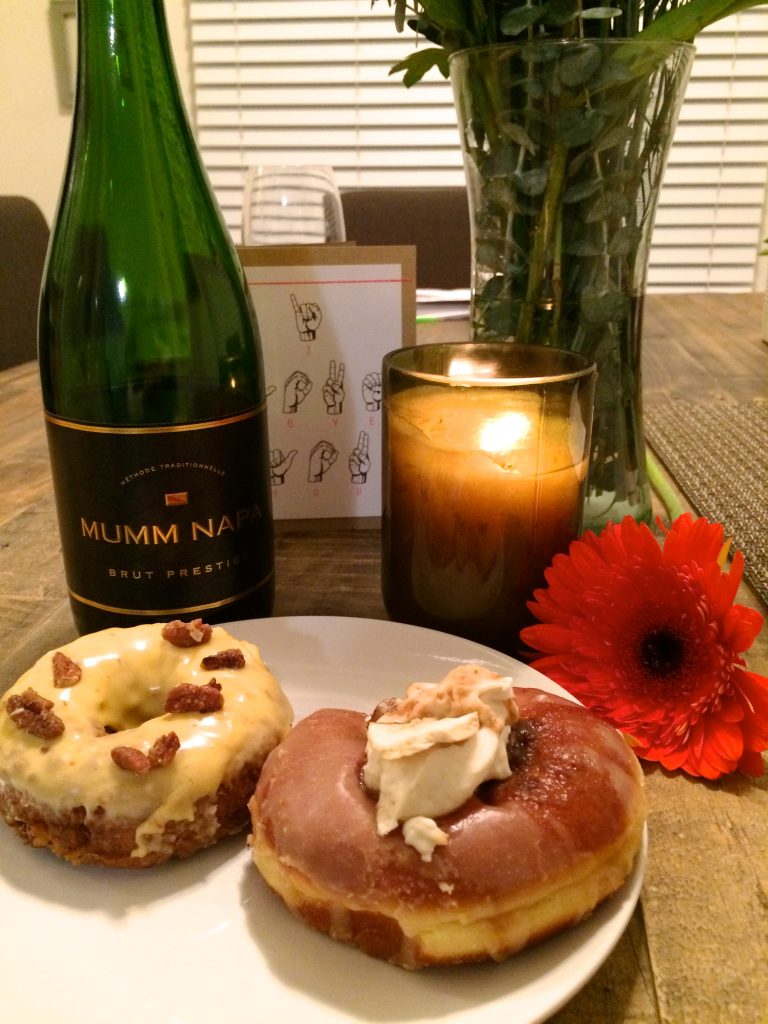 We told each other no gifts this year because we are trying to save our money, but the items that Travis picked up meant so much to me.

Our night ended with a delicious dinner at Tar & Roses, one of our favorite restaurants in Santa Monica. Earlier in 2015 it had a bad fire in the kitchen, and the restaurant only finally reopened a few weeks ago. We were so excited to go back and the food was just as incredible as we remembered it.

Alright guys, that’s it from me. I hope you have a great weekend! I am off on a bloggers trip this weekend to tour some California farms! I will be sure to check in early next week with a recap. See ya!