How was everyone’s long weekend?

Mine was wonderful. It started out with a relaxing Valentine’s Day at home. 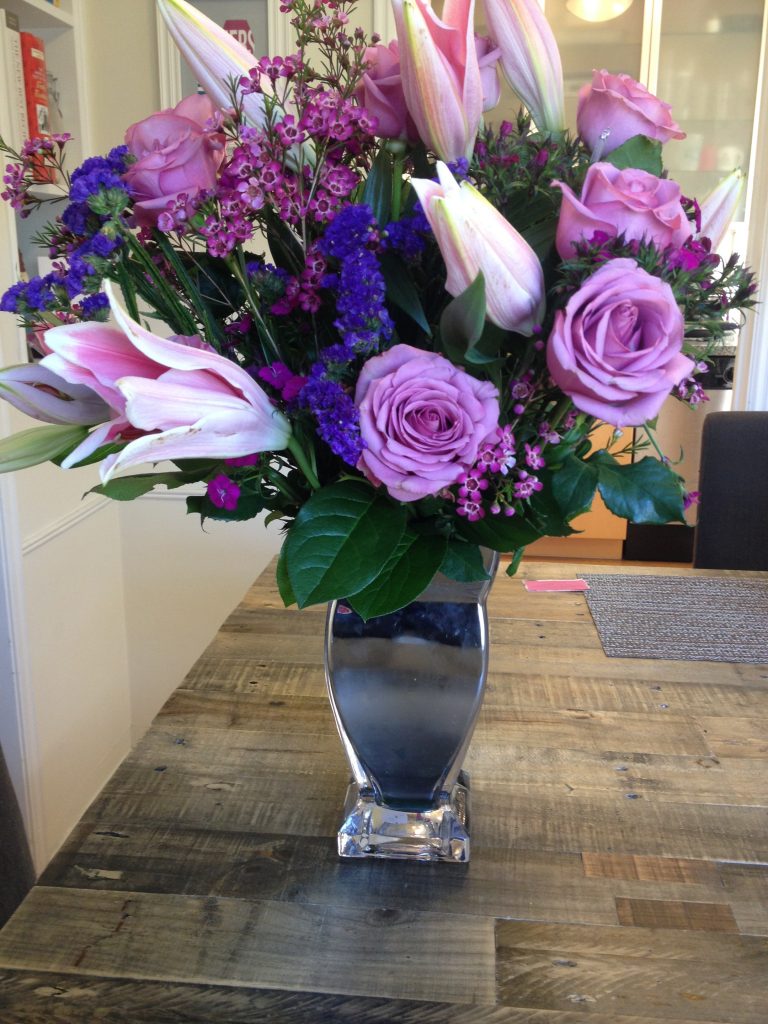 Travis and I decided to cook Valentine’s Day dinner at home on Friday night and instead go out to dinner on Saturday night. All of the restaurants we would have gone to on Valentine’s Day had prix fixe menus, and we typically avoid those because 1) they are overpriced and 2) we so rarely eat dessert at restaurants that is just isn’t worth it.

So on Friday night we decided to use the slow cooker to make beef short ribs. 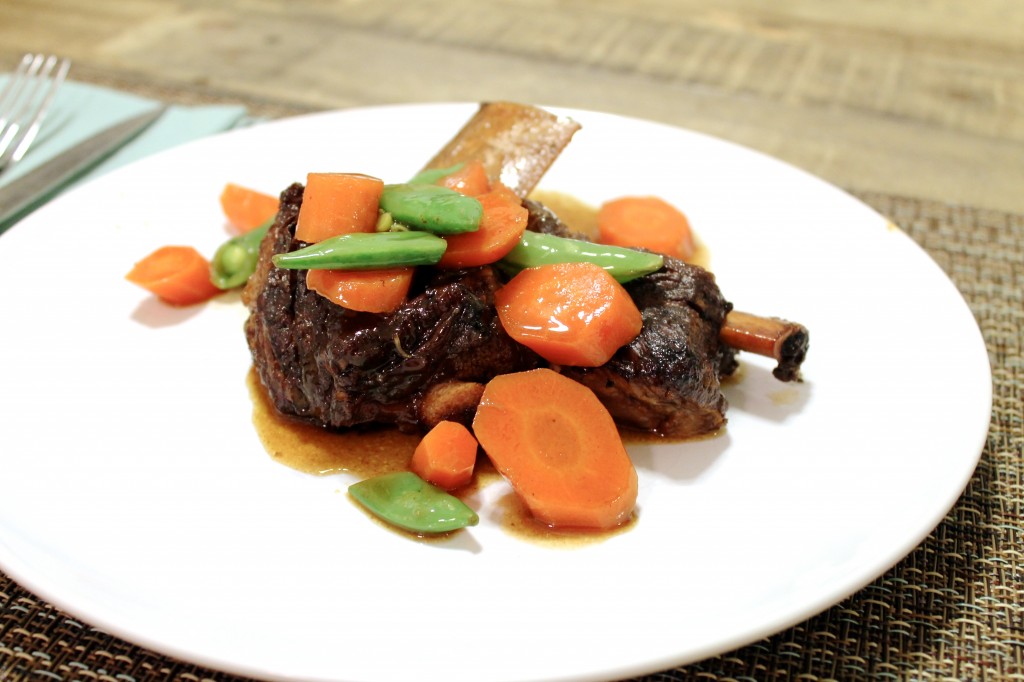 We adapted a recipe from Cooking Light and it was outstanding. The only problem was that I completely underestimated how much meat we needed because I bought bone-in short ribs, so we were both still hungry after our meal. Whomp whomp! Total fail on my part.

Good thing I also had a large batch of dark chocolate covered strawberries waiting for us in the fridge…. 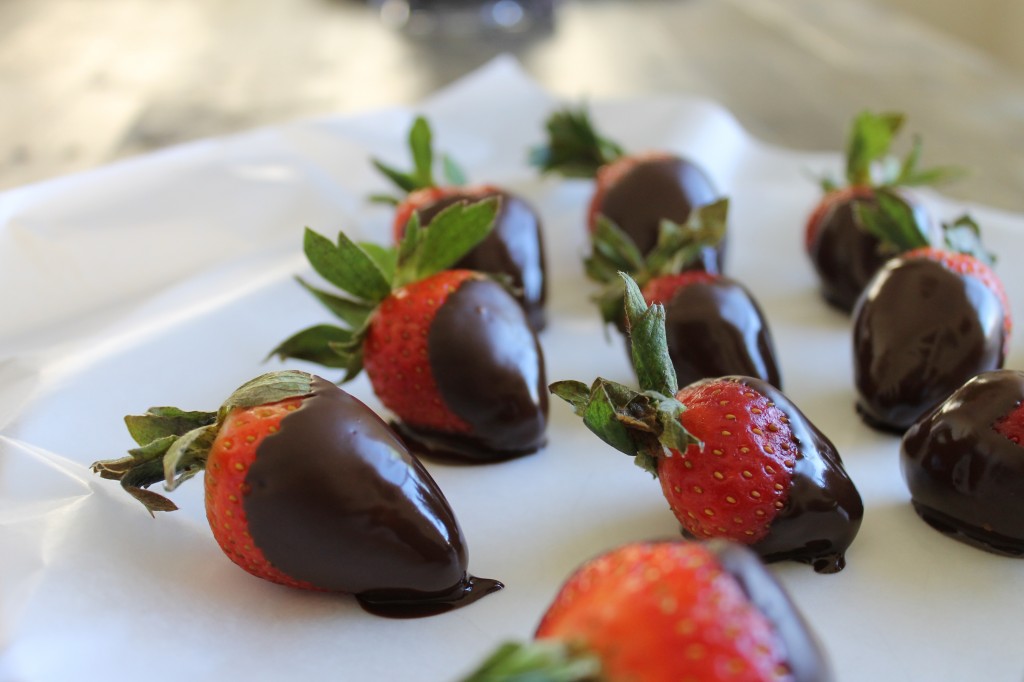 We spent the rest of the night relaxing on the couch with Bessie, our foster dog, watching Captain Phillips (which I thought was great, by the way!)

Saturday morning started bright and early with a delicious batch of protein pancakes. 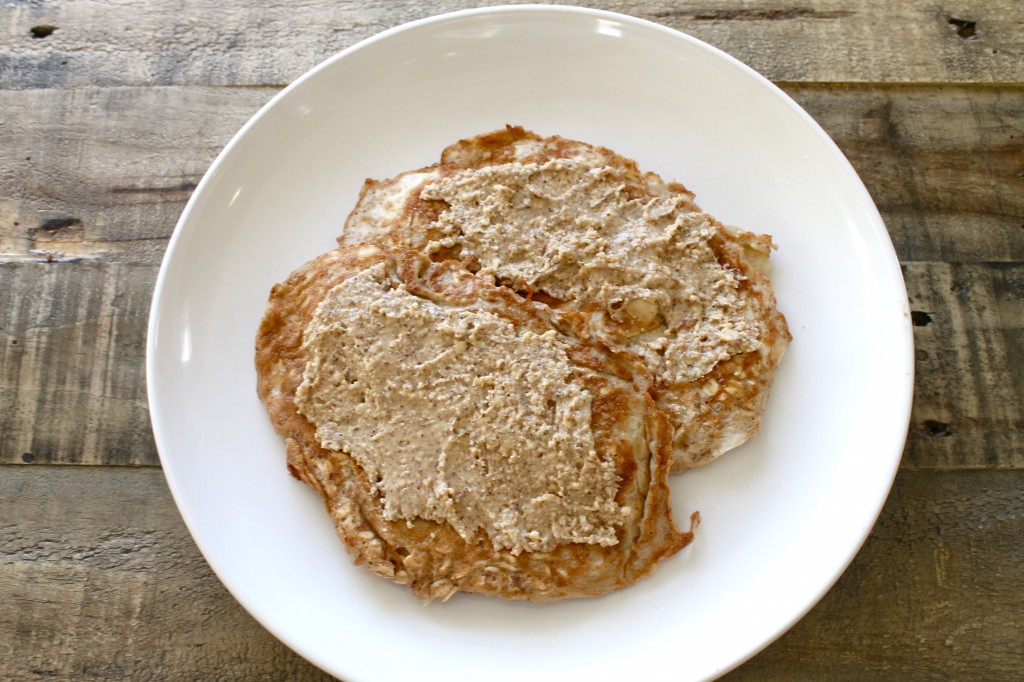 I went to the gym while Travis stayed home and binged on House of Cards for a few hours. I never got that into that show, but I know lots of you out there love it.

Post-workout, I had a delicious bowl of Greek yogurt with blueberries and a handful of my Cardamom Granola (which is almost done, so I will definitely have to more this week). 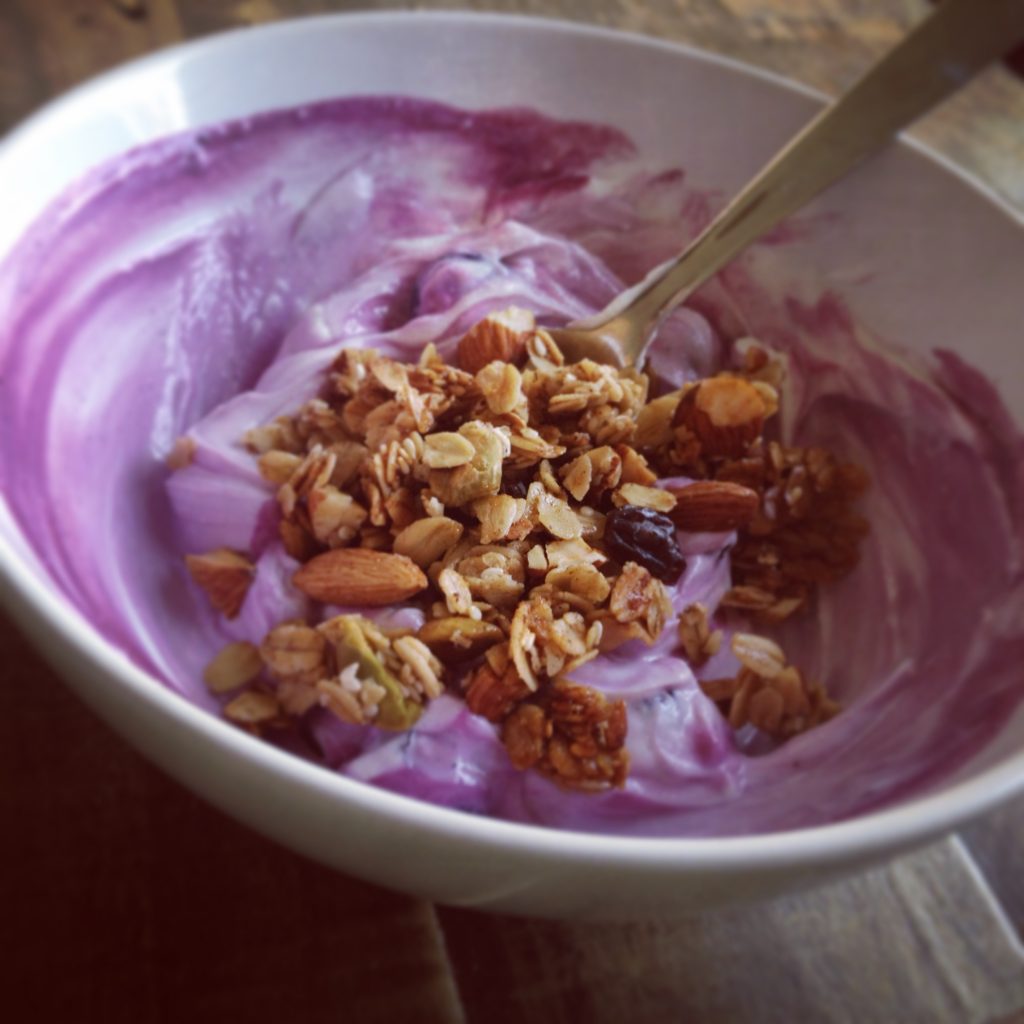 Saturday night Travis and I went to Culina, a modern Italian restaurant in Beverly Hills. The restaurant was new to both of us, and we both are always excited to explore new menus.

We were seated outside in the garden area near a large fountain, which provided very calming background noise. To start, I ordered an Italian wine I had never tried, and I was pleasantly surprised to find that the wine glass was the size of my head. Winning! Travis and I decided to split a few things instead of ordering our own entrees. We usually do this when we go out because that way we can try multiple items on the menu.

To start we had the Wagyu meatballs with LOTS of Parmesan. Mmmmm. Then we had the salad with pink lady apples, medjool dates, piave, almonds, and a light sherry vinaigrette. I regret not asking for the vinaigrette recipe because it was absolutely perfect. Finally, we decided to split the margherita pizza. We were debating going for something a little more “fancy,” but margherita is my all-time favorite kind of pizza, so we said “to hell with it!” and ordered what we knew we were guaranteed to like. I mean, you can’t ever really go wrong with pizza, can you? 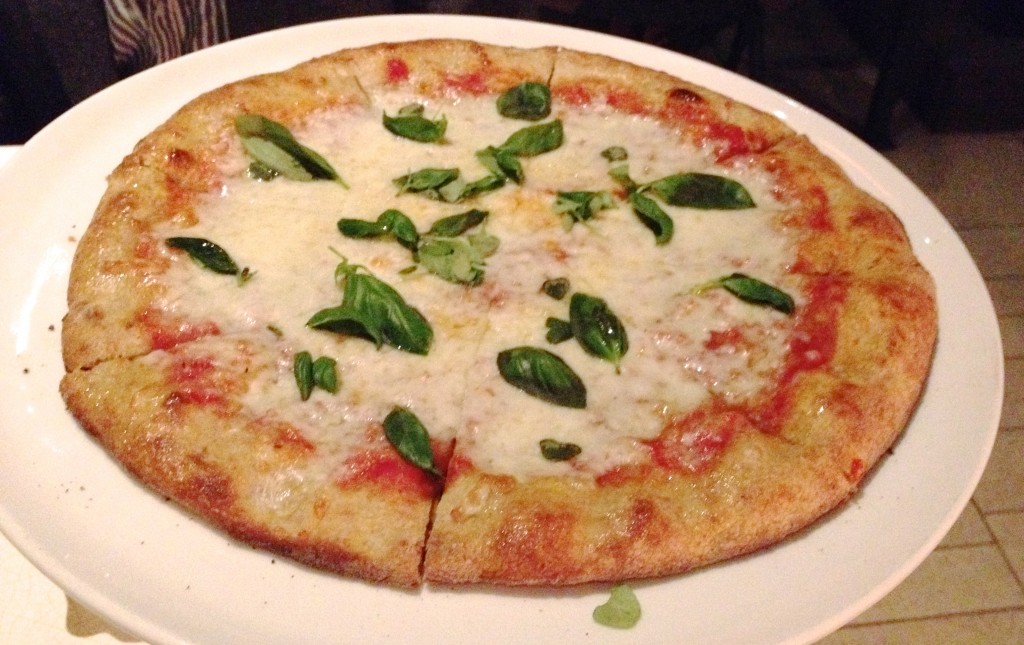 At the end of the meal, the waitress asked if we would like to see dessert menus. We politely declined and she was shocked, but we explained that we had leftover dessert waiting for us at home (a few more chocolate covered strawberries and almond butter cookies!)

Sunday morning, I wanted something different for breakfast, so I decided to whip up a batch of Whole Wheat Blueberry Pancakes. They were okay, but definitely not blog-worthy yet. I will keep playing with the recipe and when it is just right, I will share it with you guys!

The rest of Sunday was spent running around doing some errands that I have been putting off for quite some time. Thank god for the long weekend. It felt like a vacation for me – I really needed that extra day!

Sunday night I made a new dish: a chicken braise with almonds and raisins. We also popped open a delicious bottle of Pinot Gris that I bought for our anniversary about a month ago, but we didn’t get around to opening until this weekend. After we ate, I brought Bessie up to the table to sit on my lap. 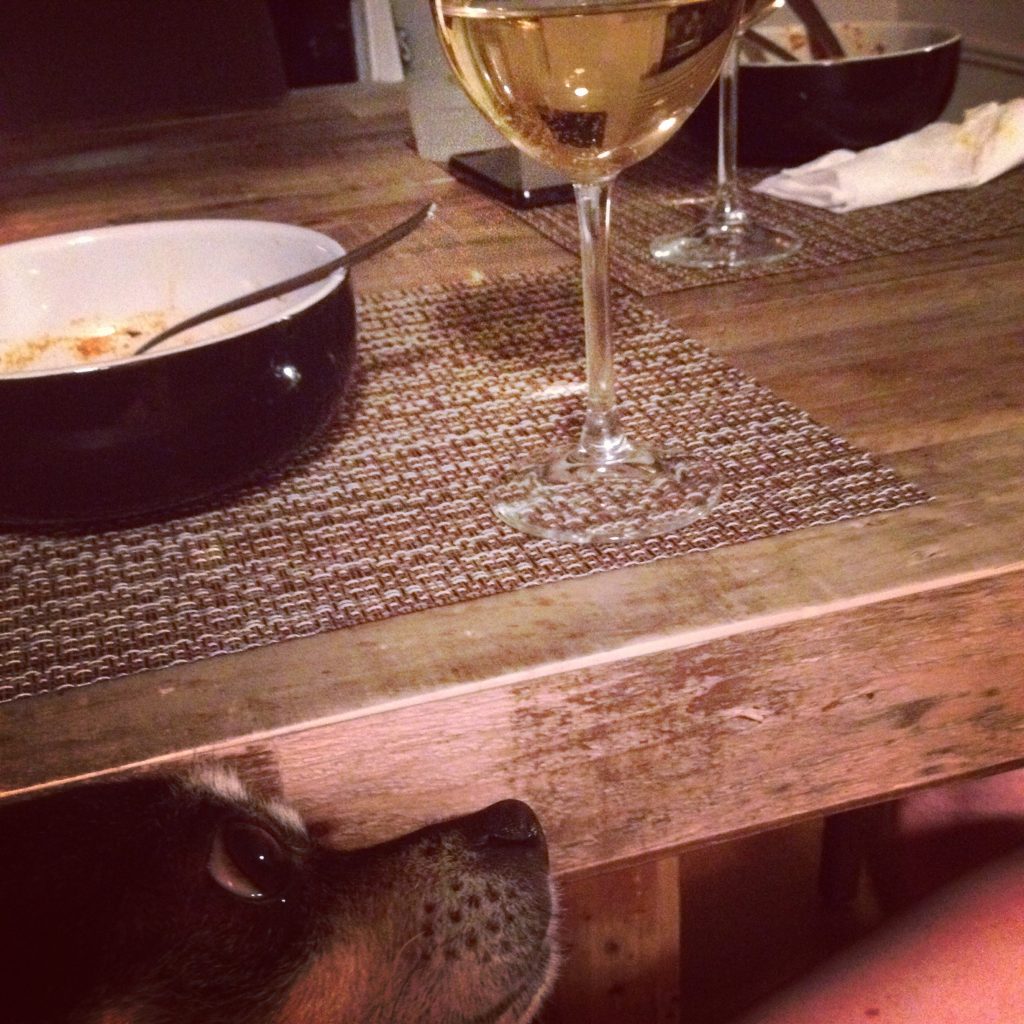 We couldn’t tell if she really wanted my wine, or if she was just longing for Travis to pet her. We actually found it amazing that she stayed on my lap for so long. Bessie is incredibly sweet, but she is a total squirmer, so up until this point she hasn’t been too good at sitting in one place.

It was glorious to sleep in on Monday morning. I love allowing myself to wake up naturally. After rolling out of bed, Travis and I ate a quick breakfast and then we took Bessie to the dog park by the Santa Monica airport. I read great things about this park on Yelp, but we still had never been. We assumed Bessie would love it because she is very friendly and loves other dogs, but it turned out all she wanted to do was walk the perimeter of the park and just sniff by herself! We didn’t get it. 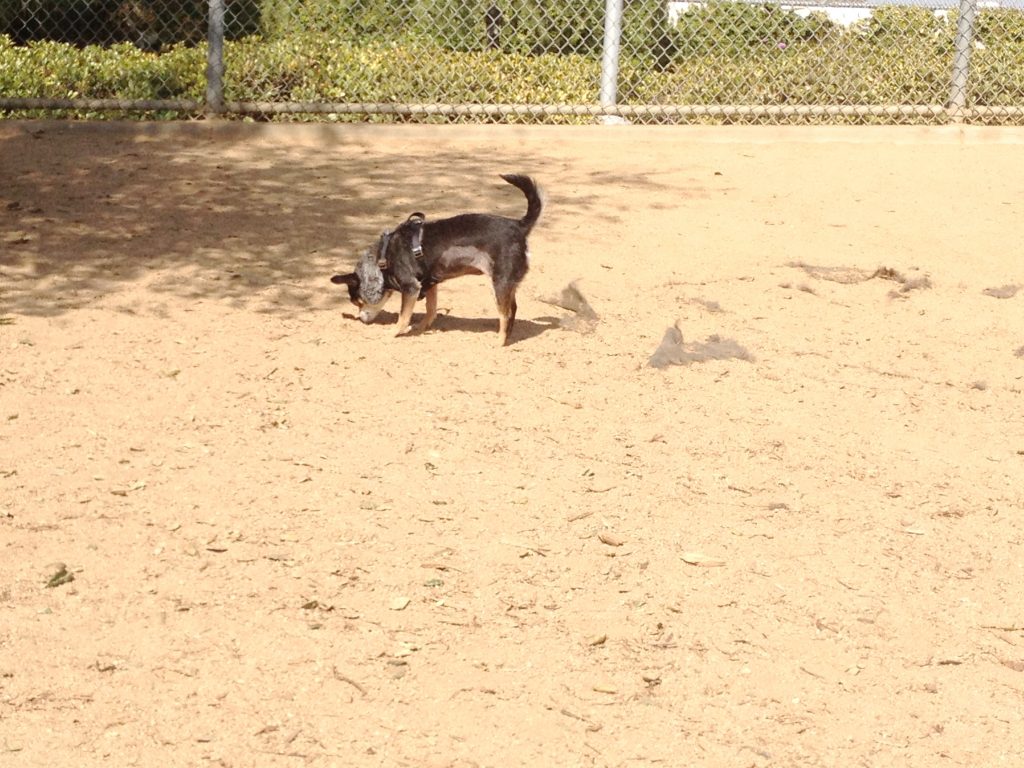 We kept trying to get her to play with other dogs, but in the end all she wanted was some petting from her favorite human people. 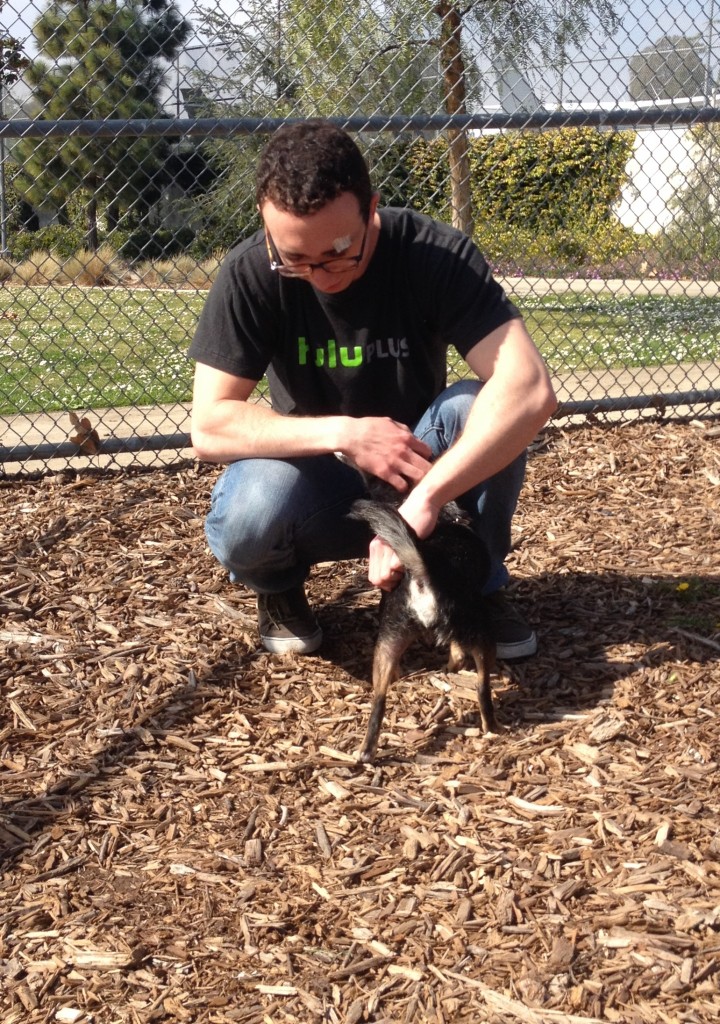 We spent the rest of Monday relaxing. Travis watched a few more episodes of House of Cards and I went to the gym and caught up on Sunday night’s episode of Downton Abbey (god, I love that show).

The weather was pretty warm last night so we grilled for dinner. We marinated chicken in a spicy soy-ginger sauce  and served it with a mixture of carrots and snap peas and grilled corn on the cob. Grilling just makes everything so easy. 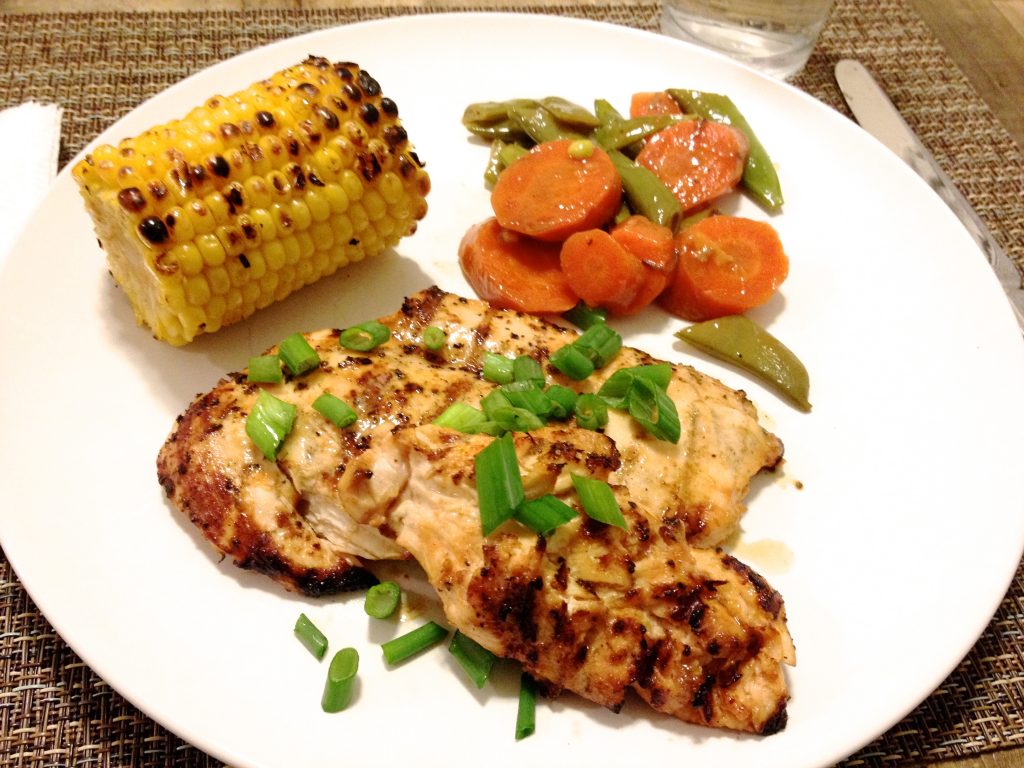 So, that about sums up my long and wonderful weekend. Now it is time to kick-off this four-day work week!

What did you eat this weekend?